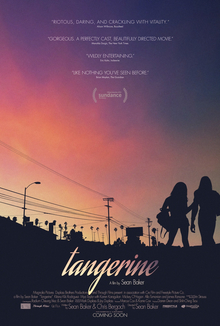 Answer one or more discussion questions below before April 23rd for a chance to win a $50 gift card (faculty & staff are not eligible). One prize available. To participate, use this form.

1. Tangerine is set in a single day. Have you seen other films that have done this? Do you think one day of action is enough to capture the spirit of characters and their lives?

2. Set in the heart of Hollywood (primarily Santa Monica at Highland) along with West Hollywood, what role does the setting play? If you were to reconfigure this film for a different part of Los Angeles (including the San Fernando and San Gabriel Valleys, South Bay, etc.) what neighborhood would you choose and why?

3. The director, Sean Baker, deliberately cast transgender actresses in the lead roles and further learned about their community by immersing himself for 8 months. In your opinion, did he do enough to portray an authentic story of transgender women in Hollywood/Los Angeles?

Tangerine is categorized, along with Gidget (1959), Earthquake (1974), Valley Girl (1983), Devil in a Blue Dress (1995), and Boogie Nights (1997), as part of LA Aesthetic in Los Angeles: On Film and On Record. The curators commented that "some places in the city are seen as safe spaces for communities that face discrimination and ostracization. . . [and] Los Angeles can be a space for pushing cultural boundaries."