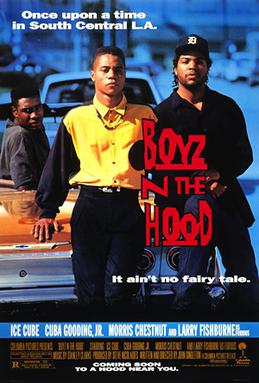 Answer one or more discussion questions below before February 26th for a chance to win a $50 gift card (faculty & staff are not eligible). One prize available. Winner will be selected by random drawing and notified by March 5th. Direct message (DM) the Library on Instagram @CSUNLibrary to enter!

Note: these questions have been loosely adapted from the AFI Movie Club.

1. Boyz N the Hood came out in 1991, 30 years ago. Why is it still relevant today? What do you think would be different in a current-day adaptation? Consider Straight Outta Compton, which was released in 2015 but set in the mid-1980's to early 1990's. How do the films compare?

2. The film focuses on race relations and tensions between the police and civilians. In the confrontation scene with Trey, why do you think the director elected to have the LAPD officer be African American instead of white? What would have been different?

3. The film is set in South Central Los Angeles. Imagine you could reimagine the film in the San Fernando Valley: which neighborhood would you choose, and why? Have you seen films set in the Valley that 'get it right' and do not poke fun at America's suburb?

Boyz N the Hood is categorized, along with Falling Down (1993), La Bamba (1987), Training Day (2001), Real Women Have Curves (2002), Walkout (2006), and (500) Days of Summer (2009) as part of LA Living in Los Angeles: On Film and On Record.. The curators have noted that "Life for Los Angeles residents is neither as dreamy nor as cynically corrupt as presented in many films. The nuances of real lived experiences in Los Angeles include both challenges and triumphs, as individuals and communities find opportunities while also facing down oppressive systemic forces."